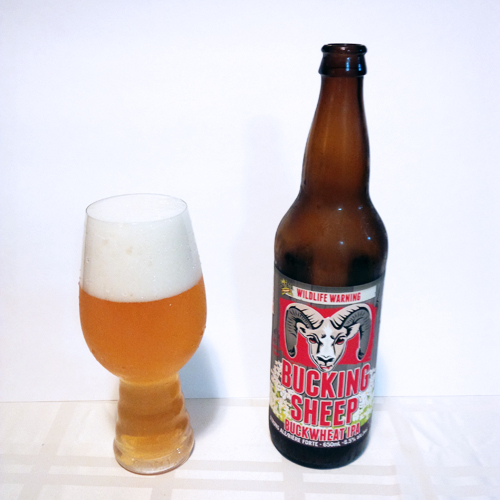 Dead Frog Bucking Sheep Buckwheat IPA: A new single batch limited release (which apparently also comes in Black) this craft beer is described as a golden IPA brewed with buckwheat on their website. It is brewed at a strength of 6.5% with 35 IBUs featuring Citra and Centennial hops in Aldergrove, BC. Now buckwheat is not wheat, it is related to Rhubarb and is often used in gluten free beers as a substitute malt. It was interesting to see it’s use in a regular beer as a specialty malt in this one.

Aroma and Appearance: It pours with three fingers of while foam with a very cloudy yellow bubbly center. The aroma is lemon, grapefruit rind citrus with herbs and hay.

Flavour: Similar to the aroma, hay and grain malt with lemon citrus, followed by a bit of orange peel that finishes with grapefruit and lemon bitterness and a nutty aftertaste that must have come from the buckwheat.

Overall Impression: The lemon in this didn’t bother me like it usually does, just enough edge taken off of it to be great.

Rating: It is another excellent beer with a rating of 8/10, new head brewer is 3 for 3 so far with the new releases.

Food Pairing: It would be silly to pair this with anything other than herbed lamb chops right?