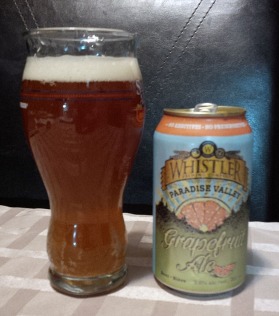 Whistler Brewing’s Paradise Valley Grapefruit Ale: Brewed in Whistler, BC with 5.0% alcohol level and poured at home from a can. This is a spring release and is generally only available for half the year, which is about right for a grapefruit ale.

Aroma and Appearance: Pours a hazy copper with a half inch of foam and is dominated by an aroma of grapefruit.

Overall Impression: This one is refreshing and is clearly a summer type beer that would accompany your patio nicely on a hot summer’s evening. I thought it was good, but not something I would choose first, but way better than a cooler.

Rating: I would rate about 6/10 for a craft beer as in above average, still drink worthy and well done for what it is.

Food Pairing: I don’t know that grapefruit pairs well with anything other than a hot summer day which they suggest on their website too.