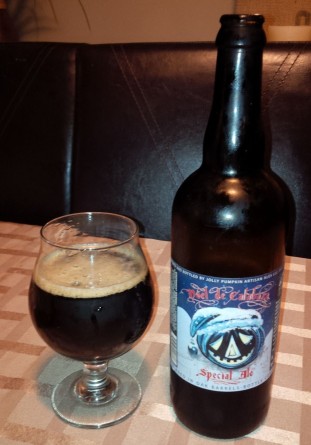 My first Sour Beer review is “Noel de Calabaza” by Jolly Pumpkin (a whopping 9.0% alc, from a 75 cL re-fermented bottle and poured at home)

Aroma and Appearance: This pours a very dark brown with a touch of foam and the aroma is dominated by tartness, grapefruit and a touch of funk.

Flavour: Well, it’s a sour beer so it is very sour, but still the spice and caramels are there, followed by sour lemon and zest that leaves you wanting more.

Overall Impression: Honestly. this beer reminds me of those Sour Warhead candies I used to eat as a child – sour, intense, but addicting at the same time. If you like sour beers, this is a must try.

Rating: I would rate about 8/10 for a craft beer as in excellent, among sour beers it is near the top though (9/10). You see I hate that sour beers often come in 75cl bottles, it really is hard to drink that much sour beer sometimes and I would have been much happier to simply consume a single glass. The large bottle starts to take a way from the experience for me, and I did pour a small bit down the drain once I had had enough of the tartness. I would love to see this in a 10 oz bottle, perhaps in a sampler 4 pack?

Food Pairing: Not sure on this one, perhaps lemon chicken or salty chips?