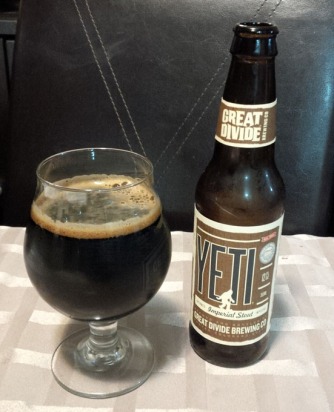 Great Divide – Yeti Imperial Stout:  Brewed in Denver, CO with a cool label and name this Imperial Stout comes in at an intimidating 9.5% alcohol level, 75 IBU’s and was poured from a 12 oz bottle into a snifter like glass at home.

Aroma and Appearance: It has a very dark brown, almost black appearance with a half inch of dark brown foam, very little carbonation and the aroma is a mix of toasty toffee, dark chocolate and dark, dark roast coffee.

Flavour: Initially I got a lot of dark bitter cocoa with some coffee, toffee and burnt marshmallow flavour. As it warmed, the caramel came out and just a hint of piney hops made an appearance here and there, all while finishing very dry, boozy and bitter from the heavy hops and alcohol content.

Overall Impression: this is a sipping beer, definitely a one you don’t want to drink quickly. I was glad it was only a 12 oz bottle as a 22 oz would be too much for an evening unless you are sharing. If serving to guests, I would serve in a 5-6 oz wine glasses after dinner to accompany dessert.

Rating: I give it a 8/10 as in excellent due to the complexity of the beer, I had one that was only bottled a few months ago so I suggest holding onto it for 6 months to a year to let it balance out a bit more. I will seek out oak aged versions of this one for the next time I pick it up.

Food Pairing: On the bottle they suggest many things including crème brûlée which I think would make a great pairing.

Anyone else had this one? What did you think?