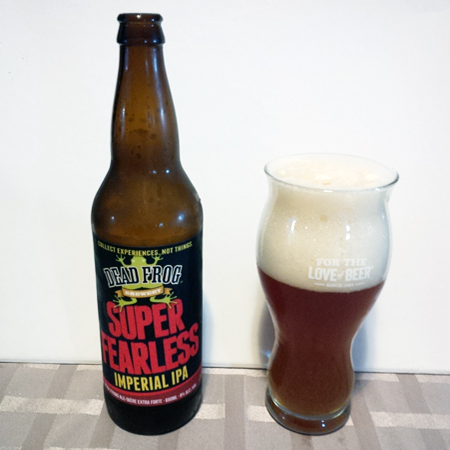 Dead Frog Super Fearless IPA Batch #1: This was one of those bottles you had to pick up pretty quickly as it didn’t stay on the shelves very long for the first release. Brewed in Aldergrove, BC at a strength of 9% abv with 93 IBUs and described as hop forward, I poured this bottle into a beer glass at home on the weekend.

Aroma and Appearance: It is very foamy even with a controlled pour there was a good three fingers of foam with a fee observable bubbles in the cloudy copper beer. The aroma was grapefruit, tangerine, biscuit malt and a touch of caramel sweetness.

Flavour: Still very hop forward, with fruity sweet malts on the tip of the tongue and some herbs, orange and caramel in the middle with a piney grapefruit finish.

Overall Impression: This one grew on me as the caramels developed and balanced it out a bit.

Rating: It is an excellent beer with a rating of 8/10, having the balance one-two hop and malt punch I have learned to love with Imperial IPA’s

Food Pairing: Always nice to have these with grilled steaks, perhaps with a bit of spicy kick to them