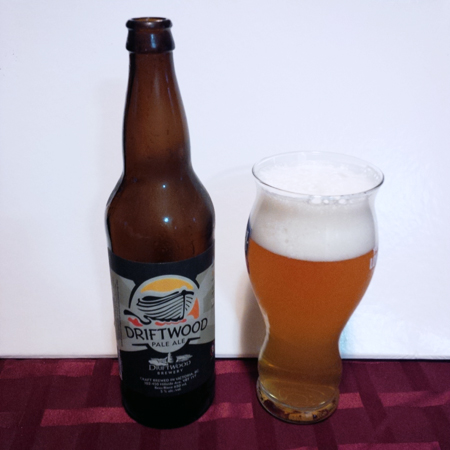 Driftwood Brewery – Pale Ale: Is a craft beer brewed in Victoria, BC at a strength of 5% abv and was poured out of a 22 oz bottle at home. It also goes by Driftwood Ale.

Aroma and Appearance: It pours a cloudy gold colour with 2 fingers of foam with some minuscule bubbles and lacy foam. The aroma is tangerine, citrus and woodsy pine.

Flavour: It has some citrus and muted bread malt up front with some lemon and earth in the middle and some fresh pine on the fry finish. It also has a watery texture and feels a little weak.

Overall Impression: I expected a lot more out of this, watery was not a word I thought I would use to describe it.

Rating: I give it an average rating of 5/10, it still had some flavours in their despite the watery texture.

Food Pairing: This would pair ok with any sort of pub food.

I feel like they just make this beer because, would not buy again as their other beers are much better.