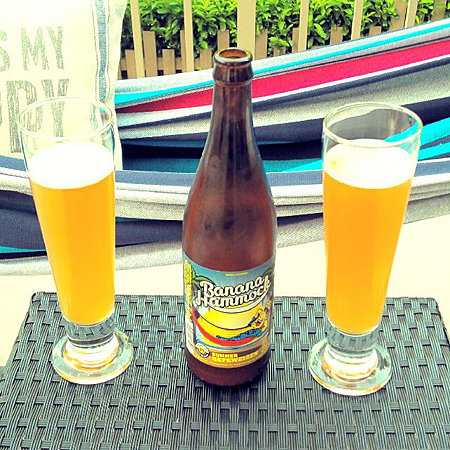 Parallel 49 – Banana Hammock Summer Hefeweizen: Is a local Vancouver brewed Hefeweizen at 6% abv and 8 IBU’s with a hilarious name, logo and was enjoyed well in a hammock on the porch.

Aroma and Appearance: It pours a typical cloudy wheat beer, however with very little head but lots of small bubbles. The aroma is banana, clove and spice.

Flavour: The first thing I noticed was the thick body from the wheat, then some mild yeasty banana bread, nutmeg and a sweet finish with a spicy aftertaste that lingers.

Overall Impression: At first I wasn’t sure, but as I kept going this flavour profile grew on me and I started to like it a lot.

Rating: I give it a very good rating of 7/10, it worked well as a summer (or late spring) beer.

Food Pairing: Start with a hot summer or spring day, a hammock, some company and then I suggest some Pad Thai or some nice spicy or salty food.

Parallel 49 has done a pretty good job of their beers, here are my other ratings for them so far: Parallel 49 Beers.