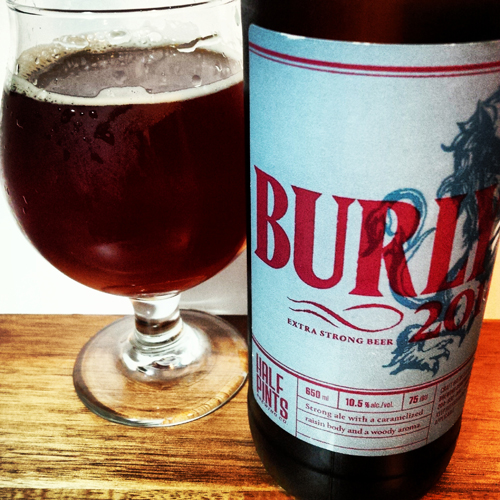 Craft Beer Review – Half Pints Brewing Burleywine Barleywine – Brewed in Winnipeg, Manitoba this Barleywine comes in at a strength of 10.5% abv and 75 IBUs. I was very pleased to get a chance to try this beer as some barleywines are very hard to come by since they are often brewed in smaller batches.

Aroma and Appearance: This beer pours a slightly cloudy reddish amber colour with no visible bubbles or foam. Its aroma is plum, toffee, raisins, dates, molasses and maple.

Flavour: Huge toffee with raisins and molasses upfront, brown sugar and dates in the middle and finally a plum like finish with caramel sweetness on the aftertaste.

Overall Impression: Exactly what I look for in a Barleywine, balanced toffee and caramel with a fruity sweetness to it.

Rating: Awesome at 9/10, great example of the style.

Food Pairing: Pair with blue cheese, blue stilton with dates (or stuffed in dates) to make this perfect.

I got some epic beer art from the bits of foam that did appear in this beer, lots of neat stuff to be seen in this picture which is similar to an inkblot.

This beer foam is a beauty, what a naturally occurring work of art. Like an abstract painting, as I admire it many different objects appear to me. Always such a treat to be able to admire the smaller and more beautiful things that spontaneously occur in our everyday lives. #beerart