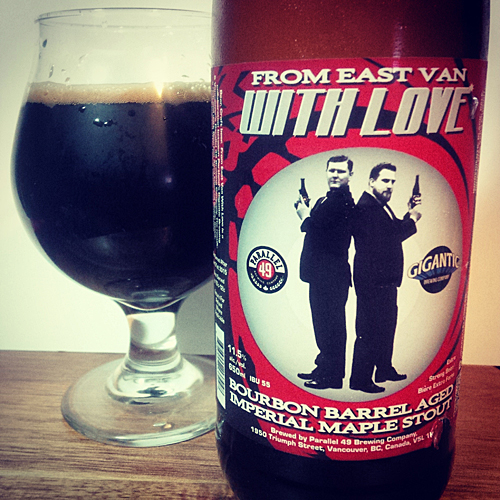 Parallel 49 and Gigantic Brewing – From East Van With Love Bourbon Barrel Imperial Maple Stout: Brewed in Vancouver, BC back in February 2013, this Maple Imperial Stout was aged in Bourbon Barrels and brewed to a strength of 11.5% abv with a cool name and an Enjoy After date of January 31, 2015 – something you rarely see in the booming BC craft beer scene. A bunch of us local beer geeks have been cellaring this one in anticipation and I opened this on Feb 19, 2015 to see how it developed!

Aroma and Appearance: It pours a dark brown colour with a thin tan foam layer and some bubbles that rise up the side of the glass. The aroma is complex with notes of coffee, bourbon, vanilla, oak, maple sweetness, toffee, rye bread, plums and cherries.

Flavour: Maple on the tip of the tongue, dark chocolate and oak resin up front with a thick body, molasses, prunes, currants and hints of dates and cherries in the middle. Its finish has lots of cocoa, dark roasted coffee, bits of maple syrup and espresso with a highly satisfying balanced booze kick on the aftertaste.

Overall Impression: You know that relaxed, satisfying, close your eyes and enjoy a sensory experience feeling? This beer does that to you. It is significantly improved since the 2013 bottle I had and I think it has room to get even better, I’ll find out the next time I crack one open!

Food Pairing: A strong complex beer like this would work well with a cheesecake, some maple cheddar or even vanilla maple ice cream.

Again, I happily used a lighter to melt the wax and open this wax sealed bottle with ease, just be sure you do this sober, in a safe place away from flammable materials and practice other fire safety tips.

How to open wax sealed bottles step 1, hold lighter near wax on upright bottle in a safe area not near anything flammable

How to open wax sealed bottles step 2 – safely melt wax around entire bottle to expose cap and pop the cap. The wax will drip down a bit, but solidify quickly.