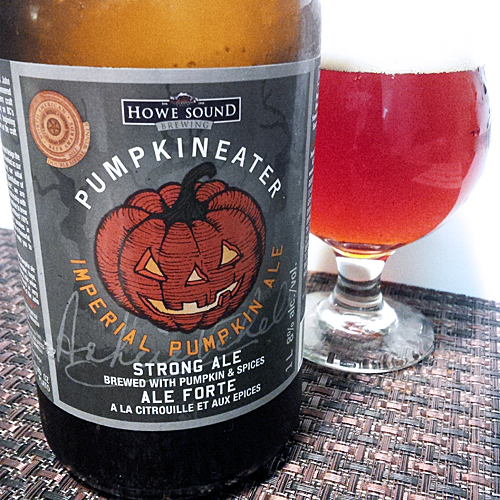 Howe Sound Pumpkineater Imperial Pumpkin Ale (Aged 1 Year): Brewed in Squamish, BC at a strength of 8% abv, this is the 2013 release of this beer that I cellared (somewhat accidentally at first). Now these beers come in 1L bottles that have a flip top which are easily reusable albeit quite huge. Putting one of these back in a night is the equivalent of a 6 pack of macro beer from an alcohol perspective, so it’s either share it or get ready to pass out shortly after finishing it!

Flavour: Mild pumpkin and balanced pumpkin spice up front, with cloves and star anise in the middle and a lovely sherry flavour finish.

Overall Impression: I guess the cellaring toned down the pumpkin flavour, which when consumed fresh is pretty strong, but is quite muted now. Consumed fresh, I recall this one being quite sweet however now the spices are all blended together perfectly.

Rating: Solid 8/10, I have decided to intentionally cellar my 2014 bottle.

Here’s a video where they talk us through how to tap a cask, which just so happens to be an oaked version of this particular beer. Admittedly, this sounds so good and I hope they do it again next year and I find out about it before its too late!