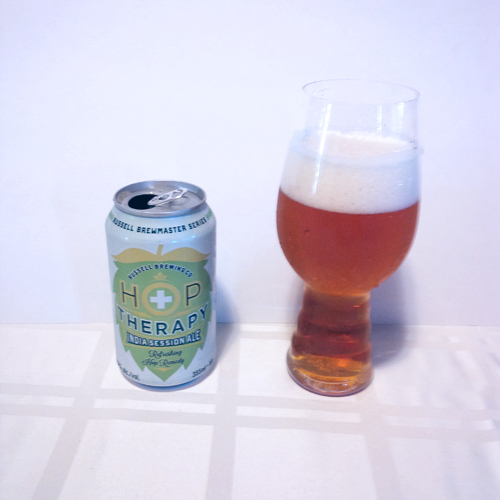 Russell Brewing – Hop Therapy ISA: I had been meaning to pick this up to try it because I really like the DIPA version, however I was hesitant because it was only offered in 6 packs and I don’t buy a lot of those – however I guess Ninkasi was watching over me as I managed to win a 6 pack and a t-shirt from them via a twitter contest (thanks Russell) and so low and behold I got a fresh batch in cans very recently. This session ale is brewed in Surrey, BC at a strength of 4.5% – just barely a session beer – with 35 IBUs and uses Amarillo, Centennial and Columbus hops.

Aroma and Appearance: This pours a clear deep golden colour with an inch of foam and a medium carbonation level. The aroma was very strong with a floral grassy dominance with some lemon citrus notes and hints of biscuit malts.

Flavour: It is hop forward with grassy hops, but the biscuit malts show up quickly and bring out a hint of sweet honey in the middle which is quickly replaced with a dry grapefruit and lemon grass bitter finish.

Overall Impression: Although I have had some good session ales, I have also had some terrible ones so I always hesitate to try these. That being said, this was great!

Rating: I give it an excellent rating of 8/10, it was refreshing, fairly bitter yet balanced enough against the malt.

Food Pairing: This is a good spicy food beer, all session IPA’s tend to be. I had it on cask with Thai chicken bites and it was a great pairing, however any spicy food will do.

Well done with this, both the ISA and DIPA taste excellent. Do you have any favourite session beers?