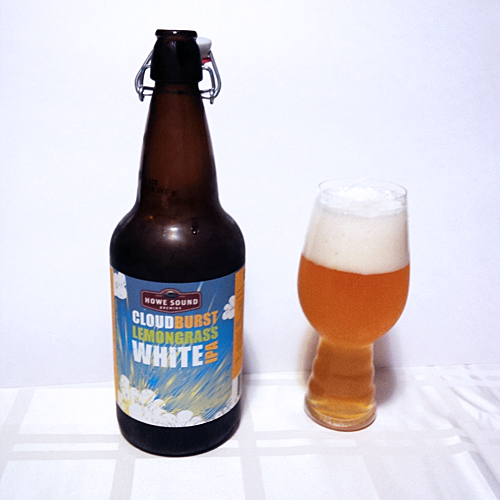 Howe Sound Cloudburst Lemongrass White IPA: This IPA was release in Feb 2014 I believe as a spring seasonal beer and was discovered in a recent cellar clean out effort where I grabbed bottles that were in the now or never stage, mostly IPAs at this point. It is brewed at a strength of 6% abv with 65 IBUs, has lemon grass as well as Centennial and Amarillo hops and was named after Mt Cloudburst in Squamish Valley per their website.

Aroma and Appearance: It pours a cloudy yellow gold colour with two fingers of foam and a mid level carbonation. The aroma fairly simple with grainy malts and lemon grass.

Flavour: Similar to the aroma, there are grainy malts with the addition of herbal hops. Overall the mouth feel is light with a bit of wheat texture and it finishes with a very slow building lemon grass bitterness that lingers for a long time.

Overall Impression: At the end of it’s freshness window (some may say beyond) it still goes down pretty good, if you see it on the shelves now don’t hesitate to grab one to try it.

Rating: A very good beer at 7/10, I had this on tap a lot fresher and rated it slightly higher at an 8/10 as it was super tasty and refreshing on tap.

Food Pairing: Would pair nicely with lemon pepper chicken if you wanted to match the flavours, or it would cut into some prawn skewers like lemon juice.

So far my cellar clean out hasn’t been disastrous, I’ve been a little better at managing first in, first out these days which is good and I am better educated on what to drink fresher and what can survive a bit longer if needed.