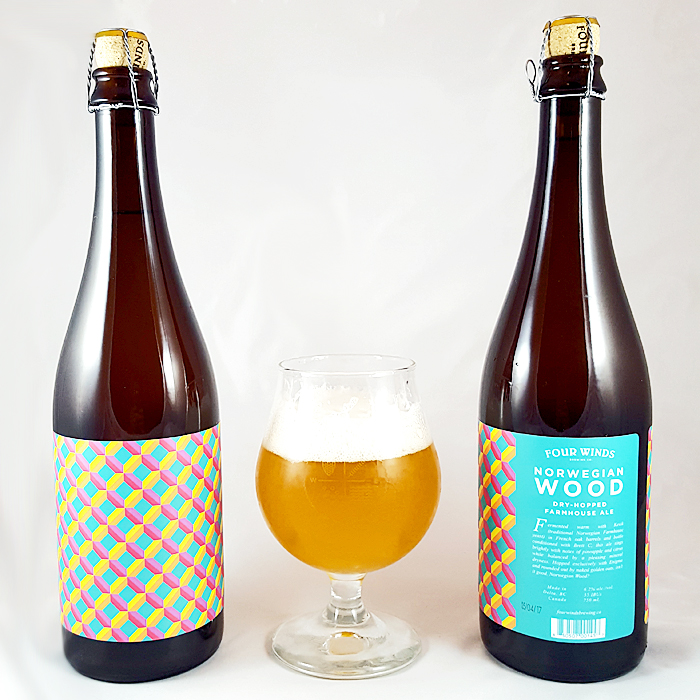 Norwegian Wood is the name of a famous song by the Beatles written about an affair that John Lennon was involved in. It is also, apparently, the name of this beer. However, the similarities between the song name and the beer pretty much end there. Instead of a coy reference to cheap wall paneling, the Norwegian Wood reference here is the use of a traditional Norwegian farmhouse yeast called Kveik, a yeast sometimes allowed to dry in order to be stored on wooden rings, and the fact that it was fermented in oak barrels before being conditioned on Brettanomyces claussenii yeast. It’s brewed to a strength of 6.2% abv and was hopped exclusively with Enigma hops and as far as I know, there weren’t any sitars involved in the making of this beer.

Aroma and Appearance: It pours a cloudy yellow colour with three fingers of randomly lacing foam and a medium level of carbonation featuring small, fast rising bubbles. The aroma is nuanced with fresh hay, lemon and whiffs of tangerine overlaid by spicy quaffs of white peppercorns.

Flavour: Lemon and white pepper are mixed with grapefruit juice in the front of the beer followed by a floral middle that’s light bodied, soft and effervescent. It finishes dry with rich minerals and a hint of cheesy Brett funk that drifts through the aftertaste.

Overall Impression: This is an impressive and intriguing beer that should develop nicely over time. Drink it now if you prefer a more fruity ester and dry hop presence, or age for a couple of years if you prefer more dry Brett funk. Or, do both.

Rating: I gave it an excellent rating of 8.5/10. At about $15 per 750mL bottle, the quality conditioned beer and well balanced flavour is just great enough to justify the price of a few bottles.

I’m sure there were no affairs involved in making this beer, but they did happen to throw some naked oats in the brew, so perhaps there are one or two correlations to the beer and the song that bears its name after all?