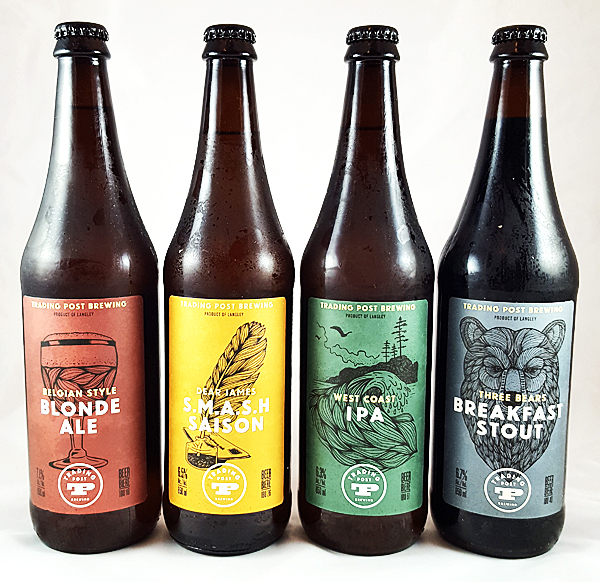 Gavin Hamilton, a Scotsman who began his career as an apprentice clerk for the Hudson’s Bay Company at Fort Langley, apparently shot and killed not one, but three bears with a double barrel shotgun on a canoe trip while hunting for wild ducks. A feat that must have left him momentarily terrified as he quickly reloaded his front muzzle loading gun while the largest of the three was rampaging towards him in a fury, only to be downed at the last possible second, causing Hamilton to fall over from the resound thud before him. This is one of a few local history lessons I did not expect to absorb while drinking beer at home over the past month – although given the name Trading Post and the connection to Fort Langley I should have at least foreseen this right? But, when it comes to great branding, engaging storytelling and making tasty beer, this is exactly what Trading Post has brought to the market with their new year round Bomber bottling program.

Normally I wouldn’t be all that enthusiastic about a 22oz bottle program – I’m a big fan of the 16oz can lately as opposed to the 22oz bomber bottle – however, I do recognize that they are an important first step for a small brewery to get their beers out to consumers. Trading Post, in an effort to help get the word out, was kind enough to send me these four different bottles to try out, free of charge. No one there asked me to write about them on my blog, but since they caught my attention, I was more than happy to write up a review of the beers and discoveries along the way.

Before I get to the beers themselves, I’d like to take a quick moment to praise the branding effort on this new line up. I’m impressed to see that they’ve moved away from the previous, less eye catching grey label motif , or the black and white theme that was used in more recent releases. Instead, they have added bold colours and quality artwork onto the new labels, while remaining consistent enough to maintain an overall brand recognition. Strong branding is very important to the long term success of a beer brand, but what matters the most at the end of the day is the stuff inside the bottle, so here’s my reviews of the four beers, presented in order of enjoyment starting with my favourite one.

Its name, Three Bears, originates from the story of Gavin Hamilton who earned his reputation of fearlessness through many feats, including the aforementioned encounter with the three bears – one he was lucky to have survived. This beer is brewed with locally roasted Republica Roasters Coffee and Cascade and Centennial hops with some oats added in to the malt to help accentuate the breakfast concept of the style. Still, given the 6.7% alcohol by volume (abv) strength of this beer, you may want to reconsider pairing it with your morning pancakes unless you have scheduled in time for an inevitable afternoon nap that’s sure to follow a morning consumption of this beer.

Appearance: As pictured, it pours a dark brown colour with some hidden bubbles and one finger of tan coloured, lacing foam.

Flavour: Up front it makes an impression of toasted oats and dark chocolate nibs while it effortlessly transitions into a creamy textured middle that’s rippled with notes of earthy coffee and soot. As it finishes, some green pepper notes rise up on the aftertaste, but as the beer warms this late appearing flavour diminishes in potency.

In a sea of hazy New England style, low bitterness IPA’s, Trading Post’s West Coast IPA stands up to the North East invasion with unrelenting West Coast pride. This is a piney bastard of a beer that was born out of a collaboration effort with the One20 Pub in Delta that has now evolved into a year round IPA offering from Trading Post. It features 6 hop varieties, 3 dry hop additions, Superior Pilsner malt and is brewed to a strength of 6.3% abv – all combined into a beer that delivers a one-two sweet and bitter punch to your throat. 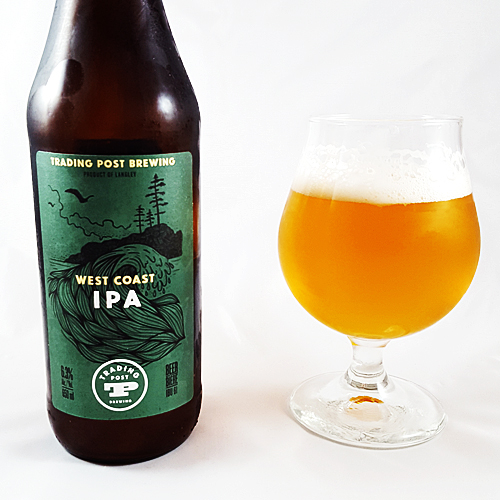 Appearance: As shown above, it pours a clear golden copper colour with 1 finger of sporadically lacing foam and a low level of visible carbonation in the glass.

Aroma: Caramel, pine and grapefruit, all of equal intensity.

Flavour: It begins with sweet caramel and chewy textured bread dough malts that linger for a second or two longer than expected before it moves into a herbal forest floor that’s littered with pine needles and bits of dirt. When those flavours fade, a strong grapefruit and pine resin pairing builds into the finish, leaving  a satisfying bitter aftertaste that leaves a lasting impression on the back of the palate.

Likely brewed because head brewer Toni takes great joy in brewing Belgian style beers, this seasonal single batch offering comes in at a potent 7.1% abv strength and features bold Belgian yeast esters flavours combined with very light hop additions. If you are into aging beer, I feel like this one has aging potential due to its potency. It will mellow and balance before it starts to deteriorate. That’s not to say that it needs aging, but if you want to observe how a beer changes over time than this one would be a good candidate to start with.

Appearance: As displayed in the picture above, it pours a clear golden colour with one finger of non-lacing foam and some sporadically appearing bubbles that can be observed sneaking up the sides of the glass.

Aroma: Some really pleasant pear and white grape juice aromas are paired up with sweet caramels, cereal grains and hints of clove spice.

Flavour: Initially there’s distinctive grains, honey and strong cloves that dominate the beginning of the beer until it intensifies into a banana flavoured bubble gum estery middle. As the sweet gum rolls off the palate, there’s a growing coriander finish that warms the back of the throat while peppercorns wriggle into the aftertaste.

The name, which invoked my second local history lesson of the month, refers to a letter written to 1844’s chief trader at Fort Langely, Mr James Murray Yale. This particular letter that was written by a female friend of his, is a racist, scorning and oppressive protest against James’ desire to marry the daughter of a local native Kwantlen chief. Seriously, it’s terrible! However, ignoring the racially charged letter James followed his heart and married his love anyways and together they had two daughters. The idea of challenge prejudice and choosing to pursue positive emotions sure does make for a warming tale, but it did strike me as a bold inspiration for a name of a beer.

Now, I’ve never particularly  loved hoppy Saisons, so keep that in mind when you are reading this. Of the four beers I tried, this was the one I didn’t like as much as the others. It is a single malt and single hop beer (hence the term SMASH) that features Bohemian Floor Malted Pilsner malts with Mosaic hops that are brewed with a Saison/Farmhouse yeast to a strength of 6.5% abv. Despite my own thoughts on it, this is the bottle that they sold out of first at the brewery since release time – clearly it’s enjoyed by many.

Appearance: As photographed, it pours a clear golden colour with minimal carbonation, and still it manages three fingers of aggressive white foam that leaves some residual lacing on the glass as it goes down.

Flavour: Cornflakes and grass are vivid up front, followed by wet hay and black tea leaves in the ale textured, medium bodied middle. The finish is classic mosaic, which is always very dank and weed like to me.

I was very happy to receive a knock on the door over a month ago from Luke, the Trading Post sales rep. It’s not often someone knocks on your door and hands you some beer, so I’d like to say a big thanks to them for letting me try the new bomber line up. As I write this, I can’t help but wonder if Gavin Hamilton knew that someday after his close encounter with the bears, his feats would be personified on the name of a craft beer? Or, perhaps one the way back to Fort Langley all he really cared about at the moment was making it home with his pantaloons intact.