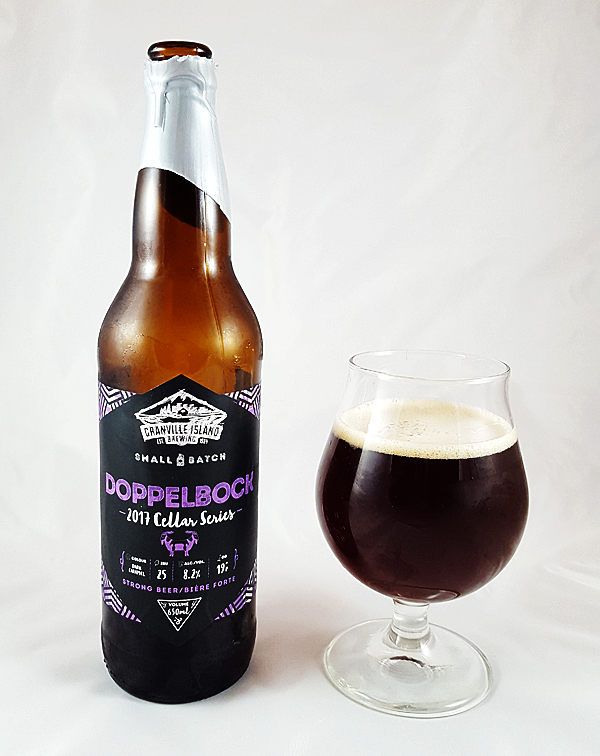 Granville Island Brewing has impressed me in the way that they’ve managed to find, in my mind, a great balance between working within the confines of larger commercial brewing and running a successful small batch brewing program locally. They always have something new on tap in their tasting room, there’s lots of experimental brewing going on in the small brewery and they’ve been putting on more and more local events.

It’s nice to see that large ownership doesn’t necessarily mean that a company has to abandon their local fans and the people that helped get them where they are today, instead they can play on both worlds if it’s done right. In fact, It’s refreshing to see community and creativity continue to thrive in this type of ownership model, something we are seeing more and more in craft beer today. I got a chance to ask Kevin Emms, their Brewmaster, about his experience working for them in the interview portion of this article while talking to them about this release and he was totally candid about his positive experience so far.

This new Cellar Series they’ve officially launched will involve releasing a vintage beer more suitable for cellaring about once a quarter, released in a special looking bottle that will last at least a couple of years in a temperature controlled cellar, or a dark space that doesn’t experience a lot of temperature fluctuation. For this release, they’ve evolved last year’s Burly Goat into this year’s Cellar Series Dopplebock which comes in at a good cellar strength of 8.2% alcohol by volume (abv), sold in a 22oz grey waxed bottle that is only available at the retail store on Granville Island. I managed to snag some time with Mike (their beer merchant) as well as Kevin Emms to discuss the beer itself and give it a try in the taproom. They also gave me a couple samples to revisit at home, which I have done so and have posted my tasting full tasting notes at the end of the article.

Check out what Kevin has to say in this video here from their Facebook page which gives you a bit more info on the beer.

In an interview style discussion, here’s what Mike and Kevin had to say about this year’s release. I’ve paraphrased the answers a bit and this has been reviewed by their team for accuracy:

Q – What made you decide to start a cellar series?

A –  Well we’ve always made a few beers that could benefit from cellaring, beers like our Barley Wine for example can be cellared for many years and we even sell verticals featuring the last 4 years worth of releases around Christmas time. At the same time, we wanted a place where our Head Brewer could show off his creativity and do something a little different from time to time that we could sell in the retail store and make the experience of visiting us even more unique.

Q – Why did you go with a Dopplebock?

A – The first few months of the year are  always a little slower for breweries, so we had the tank capacity to brew a beer that takes a little longer to brew. For example a beer like this takes 8-10 weeks to properly ferment and condition because it uses a lager yeast. Also it’s a beer that’s hard to brew and it takes a lot of skill to get it right; it’s a beer a brewer can be really proud of and that challenge is very exciting (Kevin’s words).

Q – How often will we see Cellar Series beers and where can we get them?

A – You’ll see them about once a quarter, depending on what’s being brewed of course. They’ll all look a little more special, like a foiled or a waxed cap to help indicate their uniqueness. The wax also helps provide another barrier to oxygen (which can inhibit the cellaring process if the beer is exposed to too much oxygen), so there’s a small added benefit there as well. These are only available at the brewery for the time being.

Q – What’s next in the series?

A – We are working on a Japanese Biere de Garde, that should be pretty interesting!

Chatting with Kevin and Mike:

Q – So how has it been moving from a small craft brewery into a larger operation owned by Molson Coors that still operates a small batch brewery here?

A – Honestly it’s been great. I actually have more creative freedom than ever, access to awesome equipment, great ingredients and honestly I’m really happy.

Q – Have you dabbled in the Hazy IPA or Milkshake IPA world?

A – Oh for sure, we had one on a test tap in the tasting room recently. I mean we had to try making one and people seemed to like it.

Q – So you have a lot of control over what you brew?

A – Oh yeah, I mean sometimes we’ll have a team type project like the Mocha Porter where I’ll build the recipe together with input from others, however for the most part I get to brew what I’m interested in. It’s one of the biggest misconceptions about moving to this brewery.

Q – Getting back to the Dopplebock, what’s your ideal setting for this beer, especially with Spring arriving (at least from a calendar perspective anyway).

A – Given that it’s a higher abv beer at 8.2%, this isn’t your everyday weekday beer and is probably best to enjoy on a chilly Spring weekend night. Or if you like to cellar beer, try one now and save one for the next winter or even the one after!

Aroma and Appearance: It pours a very dark amber, almost brown colour with one finger of very light beige foam and lots of small bubbles that speed their way up to the top of the glass at a rapid pace. The aroma is quite complex, featuring initial notes of plum, toffee and raisin bread on the initial quaffs, followed but more subtle nuances of black currants, leather and fig newtons.

Flavour: The toffee is very prominent up front in this malt forward styled beer and there’s an accompaniment of raisins, prunes and malteasers to round out the sweet and savoury profile of it. In the middle, it has rich texture with pleasant leather impressions and hazelnut skins before finishing with high quality milk chocolate and a savorous nutty aftertaste.

Overall Impression: It’s a very well done Dopplebock, a beer style we don’t see enough of locally. Watch out, I did not heed Mike’s advice and drank this on a weekday and it hit me like a tonne of bricks, so needless to say I slept well that night!

Rating: As this was provided to me as a free sample, I won’t provide it with a numbered rating. However I will say, I’d be happy to buy more.

Food Pairing: It makes a nice stand alone dessert beer and would pair up well with ice cream or rich cured meat like Bayonne ham.

Like all cellar beers I buy now, I like to have one fresh and put at least one into the beer cellar to see how it develops!