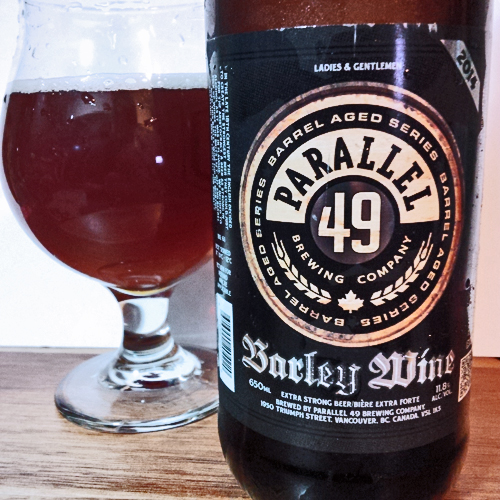 Parallel 49 Barleywine 2014: Brewed in Vancouver, BC at a strength of 11.8% abv with 61 IBUs, this Barleywine was aged in Whisky barrels for 10 months and bottled into silver wax sealed 22 oz bottles.

Aroma and Appearance: It pours a clear red amber colour with a small amount of carbonation and a very thin layer of foam. The aroma is oak, vanilla, caramel, toffee, whisky booze and hints of cinnamon.

Flavour: Oak resin, vanilla and booze up front featuring a fairly thin body with raisins, dates and toffee in the middle. It finishes with hints of cinnamon, spice, plum and sherry with some floral hop overtones.

Overall Impression: Quite unique for a barleywine, it really drank like a Brandy. This will mellow a bit over time, but I don’t think it will develop too much beyond its flavour profile.

Rating: I still really enjoyed this one, excellent at 8/10. Drinkable now, possible to age it further.

Food Pairing: Like a good Brandy, this would go well with dark chocolate.

In regards to wax sealed bottles, I prefer to open them by melting the wax with a lighter. For this bottle I simply stood it upright, held a lighter up to the wax near the cap and rotated the bottle letting the melted wax seep down the neck of the bottle. I find this method works way better than trying to cut through the wax with a knife as long as you don’t burn anything in the process.

When opening a waxed bottle, melt it with ease instead of trying to cut through it