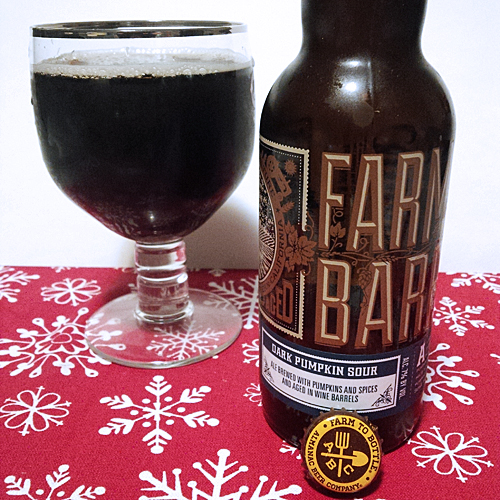 Almanac Dark Pumpkin Sour: Day 16 of my Advent Calendar exchange with my father, featuring a sour pumpkin beer aged in wine barrels that is brewed to a strength of 7% abv by these gypsy brewers who do a lot of barrel aging. I have seen this brewery’s beers on the shelves in the USA a lot, but have never taken the plunge and bought one (mostly because I had my eyes on other beers instead). This was my first exposure to this brewery and I have always wanted to try one of the few pumpkin sour beers on the market like this one.

Aroma and Appearance: It pours an unassuming dark brown with no carbonation and no real foam. The aroma is a general sourness with apple cider vinegar, rotten fruit, lemon, squash and nutmeg.

Flavour: This is a very sour lemon and apple cider vinegar  beer, however if you pay attention the pumpkin, nutmeg and nut flavours come into play and make it quite a delightful journey.

Overall Impression: It’s always nice to have a sour that isn’t just sour flavour, rather it is a beer that explores other flavours not normally found in a sour ale.  Be warned however, this isn’t a starter sour beer for someone who hasn’t had this style before, so probably not a good one to try as your first Sour Beer.

Food Pairing: Sour beers are tough one’s to pair with, yet I think if you fried up some squash, drizzled it with some aged balsamic and goat cheese than it would work out really well with this beer.

Here’s a nice quick video about their brewery and their barrel aging program. I love they way the use a nail to open and close one of their barrels to test the beer inside, quite a practical solution!