This Sandwich That Beer Throwdown IV: This was the fourth occurrence of this event where 9 local chefs and 9 local brewers made special pairings of sandwiches and cask beers in a throw-down contest. Beyond the everlasting bragging rights of being named the winner, they also contributed to raising money for Growing Chefs who is dedicated to teaching kids about growing and cooking healthy food. I l really enjoy pairing beer with different foods, so luckily enough I was able to get tickets to this even (the sold  out in 2 hours) and even better I was able to take my wife out on for a Sunday afternoon filled with nice beers and amazing sandwiches. This particular event is put on by local foodie blogger Kevin whose blog is aptly named This Sandwich, That Beer and it lasted about 3.5 hours from 1:00 to 4:30 being held at the Portside Pub in the ever popular Gastown district of Vancouver, BC. Ticket proceeds raised $5000 for the charity, people donated over 170 lbs of food to the food back and we all stuffed our selves to the brim with meat, bread and beer in the name of healthy sustainable eating.

Overall Impression: This was a rather unique event that made everyone jealous when I told them about it, honestly the food was quite excellent and the beer was decent too. We had a pretty good time, we got to vote for our favourite cask, our favourite pairing and our favourite sandwich. We sat at the bar in the Portside Pub, tucked in the corner near the back (our view below) enjoyed what has to be the most delightful way ever to contribute to a good cause.

Cost of Event / Value for Money:  Tickets were $40, which got you a 4 oz sampler of the 9 casks and one of each small to mid size sandwich being offered that night (extra casks pours were $2, I believe proceeds of those extra tickets also went to charity). Some of us were joking that sometimes it seems that you can’t even get a single sandwich and beer in a Vancouver bar for $40, so really this was a pretty sweet deal and was really high value for the money. Honestly they should charge more and hopefully we can donate even more money to the cause next time!

Best in Show: Overall I picked the Portside Pub Whiskey Maple Bacon Ice Cream Sandwich with the Parallel 49 Salty Scot Salted Caramel Scotch Ale as the best pairing, and it was awarded the gold medal at the event for best pairing. This was despite the fact that they ran out of sandwiches due to a short shipment on the cookie part (they still served the ice cream until they ran out of spoons – there’s a story behind all of this that I sort of half overheard from the staff). My choice for the cask was Persephone Rum Runner Red Ale as it was far superior to most of beers there in terms of pure flavour and quality – the crowd however,  went  with the Oaked Red Truck  Whiskey Porter which was also good). Finally, best sandwich was the El Camino smoked ham sandwich by El Camino’s. Pretty much all the food was top notch and the casks were decent.

Other Highlights: While pre-drinking at the bar, I managed to finally try 33 Acres of Darkness which believe it or not was my first beer by them and I found it to be quite nice. I also learned about a whole bunch of foodie places that I need to check out in the near future, lots of good choices out there and the food was top notch!

Disappointments: Now you have to consider that this event cost $40 per attendee and likely most of that money went to the charity so in many ways you are getting amazing value our of this event, however I will say the line ups were a drag. I spent more time standing in line than I did eating and drinking, often having to push through narrow walkways full of other attendees to refill our beer glasses. I strongly suggest either changing the setup or serving the beers and food as an option that needs consideration in the future. I would gladly pay more for the improved experience (up to double the cost). I do have to give credit though, I had a lot of fun and once I learned to pre-line up before each round this got better over time. At the end of the day, still a pretty great event that can be utterly amazing with just a few tweaks. Ending on a positive note, the food was outstanding. Like top notch high quality food with some decent beer pairings. A big thanks to Kevin and whoever else is involved in this event, it’s pretty cool and probably took a lot of work to get going so I would like to go to the next one whenever it happens.

Pete’s Meat pork belly pastrami with kimchi paired with Steamworks Heroica – lots of people were tossing this one out, the pork belly texture was unusual, but I liked it! 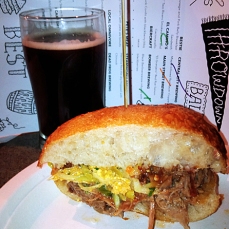 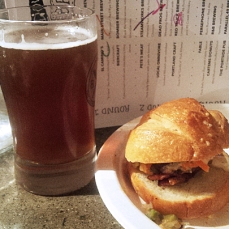 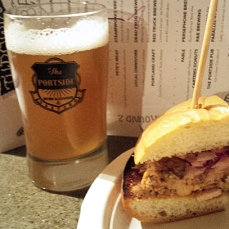 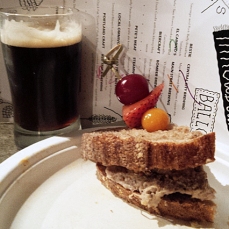 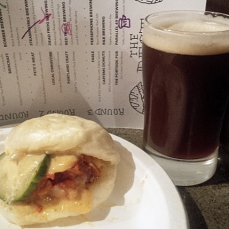 3 thoughts on “Event Review – This Sandwich That Beer Throwdown IV”