Planning on visiting BC to tour the breweries, or simply live here and want to sample? Check out this great link to The Hoppy Ending blog for a Vancouver Brewery Map. Great site too!

Here is a map of Vancouver’s breweries that are within a 20 minute drive of downtown. I have included Bomber Brewing, Main Street Brewing, Red Truck Brewing, Black Kettle Brewing and Steel Toad Brew Pub, which haven’t opened yet, but will be soon!

While there are nearly 30 breweries in Metro Vancouver, there are 19 that are within 20 minutes of downtown.

As you can see, there are two major clusters: the Brewery Creek cluster and the Powell/Victoria cluster. Also, one could potentially begin a brewery crawl on Granville Island, striking the two breweries there, then take a ferry to Yaletown to the brewery there, walk to Steamworks Brewing Co. then grab the Sea Bus across to Greenleaf Brewing. Just a thought.

Go ahead and map your route! (Click to enlarge) 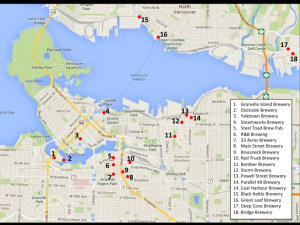