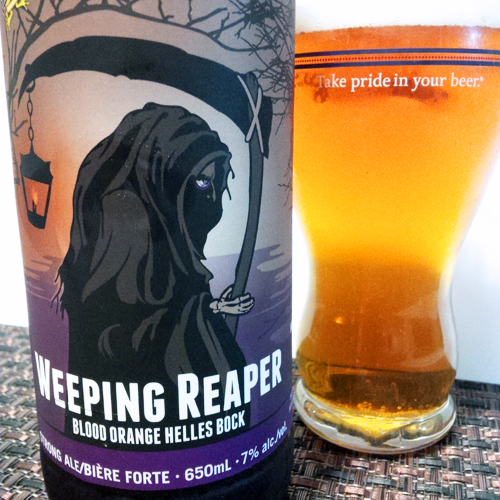 Dead Frog Weeping Reaper Helles Bock: Is a single batch limited release Helles Bock with blood oranges that is brewed at a strength of 7% abv and 26 IBUs featuring Northern Brewer and Hallertau hops. This beer has by far, what I consider to be, the best  label of all the local beers. I actually drank this on Halloween night, but saved the review for later.

Aroma and Appearance: It pours a light clear copper colour with one finger of foam and some medium carbonation. The aroma is light toffee, orange juice, caramel and cereal grains.

Flavour: A lot of toffee up front with a very definitive blood orange flavour and some tangerine citrus in the middle and a mild floral bitterness with a crisp finish.

Overall Impression: Decent beer, a bit over powered by the blood orange, but not in an unpleasant way.

Rating: I give it an above average rating of 6/10, pretty good stuff but the blood orange sneaks in a bit too much to rate higher.

In the spirit of this beer, I’ll leave you with some of the most interesting depictions of the Grim Reaper on film. Personally, I think the Hellboy and Baron Muchausen versions are the best.