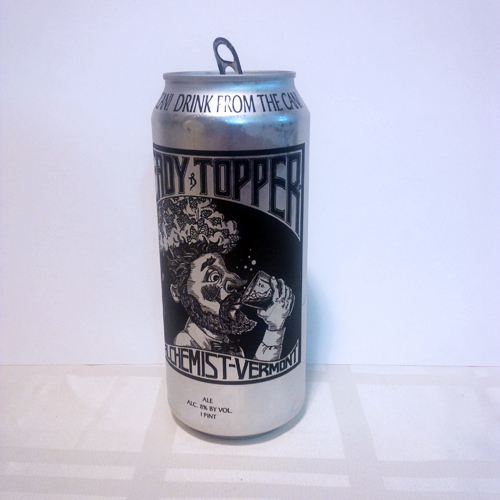 The Alchemist – Heady Topper Double IPA: this brewery in Vermont currently only make this beer which happens to be the fourth highest ranked double IPA on ratebeer and number 11 overall beer in the world. Lets face it, this is a bucket list beer and I was privileged enough to try one recently. It is brewed at a strength of 8% abv with 120 IBUs and on the can they actually request and suggest that you drink it straight from the can itself. Now, this really threw me for a loop as all my education says not to do this, however it is important to pay attention to how the brewer wants you to enjoy their product so I thought it was best to oblige, crack this open and drink it.

Aroma and Appearance: Since it’s still in the can, can’t really say what it looks like however the picture shows a guy drinking from a glass which is funny. The aroma I got from the small can opening was mango, doughy malt and some stone fruity hops.

Flavour: This is intense with caramel and doughy bread malts, a hint of tin and the a crap load of orange, lemon, citrus, pine and grapefruit bite that basically explodes in your mouth. Because it is straight from the can, the extra carbonation provides a slightly lighter mouth feel and intensifies the bitterness. Yet somehow, the sweetness balances it out just enough.

Overall Impression: Very tasty, very unique in it’s experience. Would love to do a side by side in the can and in a glass some time.

Rating: It is an awesome beer at 9/10, by far one of the better beers I have had.

Food Pairing: Some lightly spiced chili lime prawns would be nice here, not overly spicy as the high bitterness would intensify the spice too much.

If you are only going to brew one beer, be sure to make it taste as good as this one!