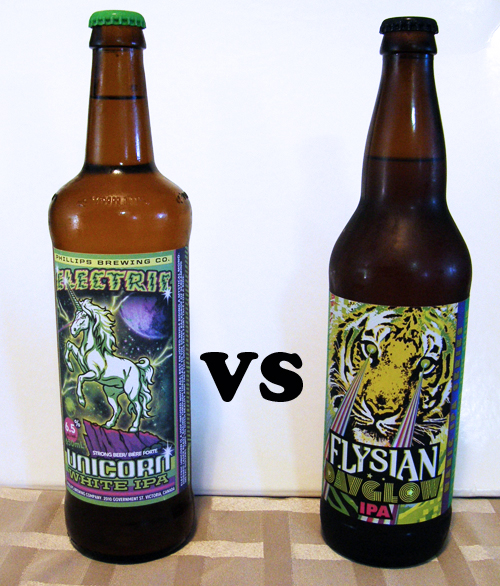 It was IPA Day on August 7th and I thought I would earn my Untappd badge in style by putting two of the most ferocious, laser eyed, glowing IPA beer label animals against each other in an EPIC battle of IPA awesomeness, this battle is more about just the beer inside, but ultimately it was the bubbly stuff that did finally determine the winner. Although not the same styles of IPA, they were both released in April so should have the same amount of freshness. Here is my breakdown of the ultimate IPA Day contest.

1 point Electric Unicorn, you can almost buy 3 Unicorns for the price of 2 Tigers

What does the internet think:

Which has the better bottle/label: I can’t even begin to pick a winner here, the psychedelic laser eyed Dayglow tiger is totally ferocious and bad ass, while the Electic Unicorn may not sound quite as tough, the fact that it too has laser eyes as well as electricity emanating from its body pretty much makes them equally awesome.

1 point each for Dayglow and Electric Unicorn

Reviewing the the peripherals, both of them are so far tied so it really does come down to the most important part which is the bubbly hoppy beer inside. To properly compare these IPA craft beers, I drank them side by side at the same temperature, cleansing my palate in between switching glasses, taking notes on both at the same time and  finally rating them once finished. I even mixed them at the end to make an Electric Dayglow Tigricorn which was fun if not dangerous. 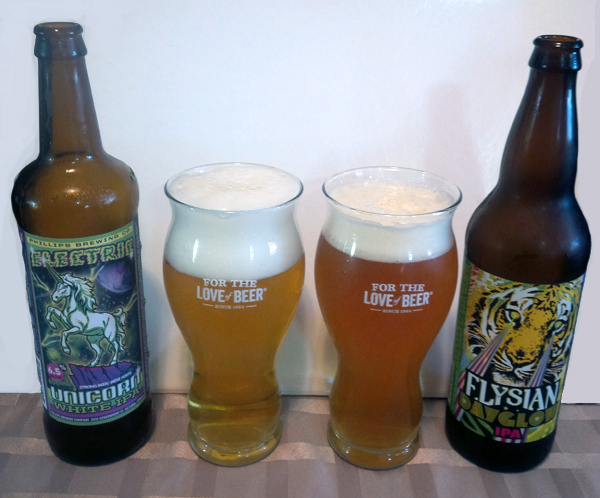 Beer#1 – Phillips Electric Unicorn: Brewed in Victoria BC, this White IPA is brewed at a strength of 6.5% abv with un-disclosed IBUs.

Aroma and Appearance: As pictured above, it pours a clear honey colour with two fingers of foam and well carbonated middle and some lacing as the foam settles. The aroma is light citrus, grass and some floral tones.

Flavour: I got some sweet honey on the tip of the tongue, some light grains, lemon citrus, hints of mango and orange peel with a bit of a resinous citrusy bitter finish.

Overall Impression: There are some subtle and slight subdued flavours here that develop nicely as you drink it, but you sort of have to look for them.

Beer #2 – Elysian Dayglow IPA: Brewed in Seattle, WA as part of the Manic IPA series this IPA is brewed at a strength of 6.5% and IBUs in the mid sixties.

Aroma and Appearance: As pictured above, it pours a slightly cloudy orange and copper colour with one finger of lacy foam and some small side bubbles. The aroma is peaches, mango and caramel.

Flavour: I got bready malt, peaches, caramel, with a very herbal bitter finish that lingers with notes of pine resin.

Overall Impression: This one is a bit more in your face with the bitterness, the Mosaic hops work wonders here with the aroma and the malts.

Rating: I give it an excellent rating of 8/10

Ultimate IPA Day Winner: Elysian Dayglow won 4 points to 3  – it was closer than I thought, but Elysian was the clear winner here.