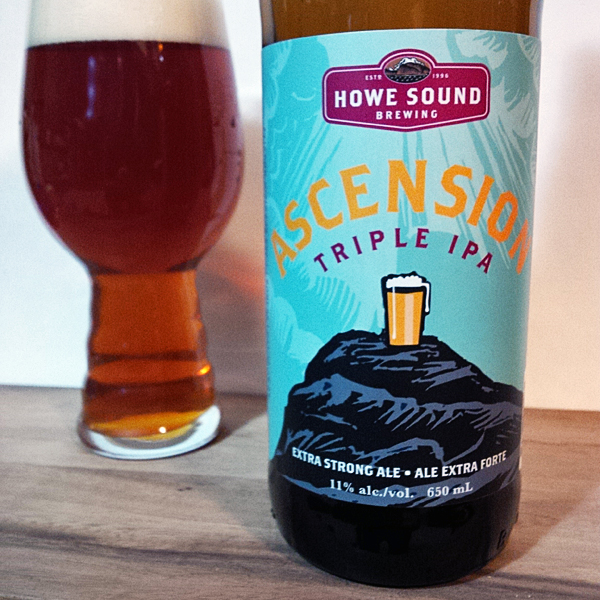 Howe Sound Ascension Triple IPA: Brewed by a Squamish, BC brewery, this massive IPA comes in at a strength of 11% abv with 75 IBUs worth of hops. This is the first time I can recall a Triple IPA being bottled and released in BC in a large enough amount to be distributed at private liquor stores. It’s also Howe Sound’s second 22 oz bottle release (as they normally sell beer in large 1L flip top bottles), so times are changing there and I’m willing to bet they are utilizing their newly purchased R&B brewery to brew and bottle beers like this. In all fairness, 11% IPA’s are so drinkable it’s probably a good thing to reduce the typical 1L size just a little.

Aroma and Appearance: It pours a clear dark copper colour with two fingers of light tan foam and some slow rising sporadic bubbles in the glass. The aroma begins with whiffs of honeydew melon and tropical papaya before moving into a more stone fruit focused plum note with hints of meek passion fruit on the side.

Flavour: Mimicking the aroma at first, big flavourful notes of plum hit you right up front before highlighting some dark heavy brown bread malts mixed with bursts of pine tree. In the middle, it gets a little boozy for a moment before elegantly transitioning to an orange peel almost liqueur expression muddled with more honeydew melon goodness. Finally, as the slightly mellowed middle subsides, an intensely bitter pine and grapefruit citrus finish sneaks up on your palate and blasts it as if the beer suddenly woke up from a vivid dream all while teasing nuances of caramel and earth on the aftertaste and repeating that pattern over and over again.

Overall Impression: Very bitter but balanced well enough with the malts, esters and hop notes to make an enjoyable roller coaster ride of a beer.

Rating: I give it an excellent rating of 8/10, be sure to pick this one up and give it a whirl.

Food Pairing: This is a tough one, some Oka cheese would stand up to it reasonably, but the intensity and bitterness might be a bit too much for a traditional food pairing. If you are adventurous, try it with lamb chops or another meat that goes well with lots of herbs and spices.

This places is nestled between Vancouver and Whistler in a smaller town called Squamish, which is an hour out of town. They have a brew pub in the city of Vancouver called Devils Elbow which is worth a stop in at, but if you have a chance be sure to check out their original brewpub and see views like this which are posted from their Instagram Page (note the photo credit in the post).

The view's not too shabby. | Photo: @gillirae #Squamish #Mountains