Mt Lehman Cheese Co Gozzarella & Steel & Oak Smoked Hefeweizen: Sometimes I’ll put a beer and cheese together just to see what happens and other times my pairing is specifically intentional to attempt to recreate a flavour combination like I did with this one. I wanted try and emulate a smoked mozzarella flavour in this cheese by pairing it with a locally made smokey beer because I love smoked mozzarella and it’s kind of tricky to find fresh smoked mozza since most versions available here have been sitting on the store shelves forever.

Overview of the BC Cheese Makers and Brewers: Established in 2013, Mt Lehman Cheese Co is a fairly new operation in Abbotsford, BC. It is headed by experienced cheese maker Jason Dykstra who is particularly practiced in working with goats milk and making goat cheeses. Their goats milk is sourced locally and they have an impressive variety of cheese available in their shop and local specialty stores, so be sure to check them out!. The beer in this pairing is brewed by Steel & Oak Brewing Co in New Westminster, BC which is another new brewery in BC who just opened in the summer of 2014 with this beer as one of their flagship offerings. At this place they tend to focus on beer with a more significant malt presence and their German trained head brewer Peter Schulz’s malting background is quite evident in their tasty beers, bringing unique offerings like a Red Pilsner, Smoked Hefeweizen and a fantastic Dark Lager to a fairly hop forward market. 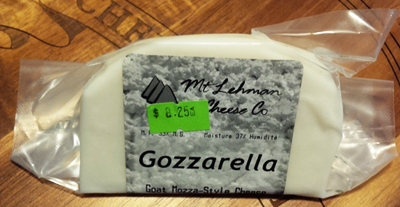 Look for their cheese in specialty grocery stores like Choices

The Beer: The Smoked Hefeweizen that Steel & Oak makes is one of the beers that really set them apart from other local breweries when they opened. Featuring beechwood smoked malts, this beer has a clovey barbecue aroma with a huge wheat texture and smoke forward flavour upfront followed by cloves, banana, lemon citrus and yeast notes. I’ve seen this beer recipe develop over time and I’d say right now it’s at its very best, basically a perfect recipe for the style.

The Cheese: Mt Lehman’s Gozzarella is a goats milk mozzarella style cheese that has a brothy yogurt aroma and very fresh mild milky flavour with hints of yogurt, saltines and a slight pasty texture. This is the kind of cheese you don’t want to overwhelm in a beer pairing, a pilsner or lager would work well as alternate beer to pair with and it is best consumed as fresh as possible, just like a good wheat beer.

The Pairing: I was thrilled beyond belief that the pairing worked exactly as I expected. The cheese took on the beechwood smoked malts and combined them to unveil hidden salt and buttery flavours in the cheese to make for a fantastic pairing. I got notes of hickory, smoke, salt, nuts, butter and an increased level of silky smooth milk in the Gozzarella while the smoked hefewiezen took on a softer texture and heighten its smoked malts and lemon citrus flavours to epic proportions while providing a surprise yeasty throat punch on the aftertaste.

Overall Rating: Excellent at 8.5/10, the cheese tasted exactly like a smoked mozza and the beer was pretty great when paired with the cheese as well.

Looking for their cheese? Check out their cheese finder on Mt Lehman’s website and stay tuned for events and launches by Liking their Facebook Page below