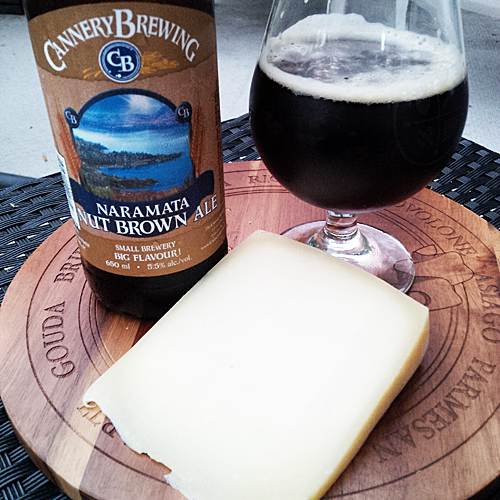 Kootenay Meadows Nostrala & Cannery Naramata Nut Brown Ale: In this pairing I feature two products from two different interior regions of British Columbia, each being an independent producer of beer or cheese. I luckily got to sample this cheese before buying a decent sized serving of it and I figured the earthy and nutty tasting notes would go perfect with a Nut Brown Ale from Cannery Brewing. The cheese was purchased at a local smokery and deli called Beast & Brine which is a wondrous place for any meat and cheese fan and worth a visit or ten. The beer at my local private liquor store and is widely available in BC.

Overview of the BC Cheese Makers and Brewers: The cheese maker Kootenay Meadows (also known as Kootenay Alpine Cheese Company) is located in the small 5000 person town of Creston which is in the Kootenays region of British Columbia. They are certified organic, they use fresh milk from their farm and they are very committed to sustainable energy practices using both solar and geothermal sources to heat water or cool their cheese cellar. Essentially, they rock and are worth checking out! The Nut Brown beer is from Cannery Brewing who is housed in Penticton, BC just below the Naramata Bench region which is more famous for wine than beer. They have been producing beer since 2001, mostly in bottles these days and have since been expanding their capacity due to product demand. 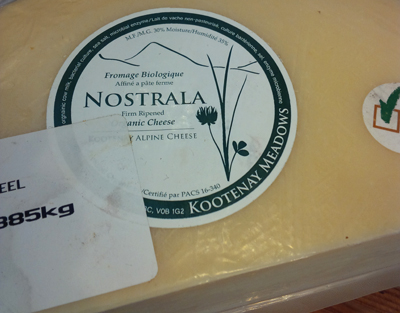 Look for this cheese wheel in your local deli

The Beer: Naramata Nut Brown Ale is a 5.5% abv beer with 25 IBUs of hops and is probably my favourite local go to brown ale. It features an aroma of malt balls, raisins, walnuts, chocolate and toffee with some added flavours of dates, plums, brown bread and almonds to round it out. For a brown ale, it has quite a few distinct flavours, but retains a decent sense of balance and drinkability that makes it pretty crushable. Normally available in 6 packs, it can be found in 22oz bomber sized bottles from time to time.

The Cheese: Nostrala by Kootenay Meadows is a raw organic milk 60 day aged cheese similar to an Italian Fontina style cheese with 30% Milk Fat and 35% Moisture, which give it a semi-firm texture. Its aroma is nutty, brothy and creamy featuring flavours of brazil nuts, wood, mushrooms, broth and some slightly crunchy bits throughout. I was super impressed by the cheese, it is great on its own, but would be amazing on a browned butter pasta dish or shredded on top of mushroom risotto as a flavour enhancer.

The Pairing: This was a solid pairing, the nut flavours in the beer intensified and multiplied giving off notes of walnuts, cashews, almonds, hazelnuts whilst enhancing the malt balls, the chocolate and bringing out some unexpected salted raisins from the ale. For the cheese, the savory salty broth flavour increased substantially, leading to some added notes of grass, crunchy almond skin and a shockingly divine caramelized onion aftertaste. I love it when pairings reveal new flavours in both of the featured products.

Overall Rating: Excellent at 8.5/10, as anticipated these two were meant to go together!

Below is a great video about Kootenay Meadows (Kootenay Alpine Cheese Co), be sure to have a watch to learn more about how they make their cheese and what their production looks like.