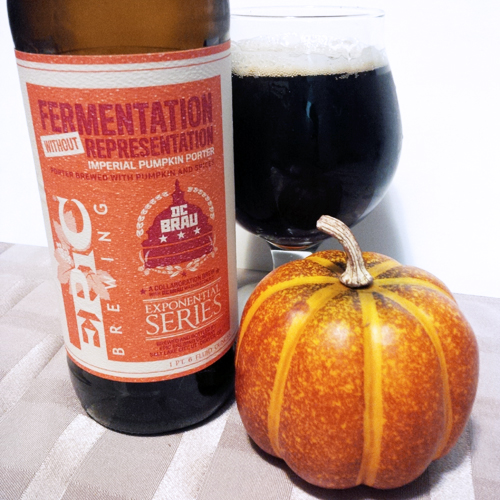 Epic Brewing & DC Brau Imperial Pumpkin Porter: aka Fermentation without Representation, this very limited Imperial Pumpkin Porter is brewed in Salt Lake City, UT at a strength of 8% abv and is a collaboration beer that is a part of their Exponential Series,. Interesting enough they use Madagascar Vanilla beans in this one as well as the usual spices normally found in pumpkin beers. I picked up a few other beer from this series as so far they have all been pretty great and this one doesn’t disappoint either.

Aroma and Appearance: This pours a very dark mahogany colour with a thin foam layer and little to no visible carbonation in the glass. The aroma is pumpkin, dark cocoa and a subtle smokey note.

Flavour: This features pumpkin up front, a bit of booze, smoke and earth in the middle and a dark coffee dry bitter finish.

Overall Impression: This isn’t an overly complex beer, however it is balanced perfectly.

Rating: I liked this a lot, 8.5/10 and one I hope to find again next year (had to really search to find it this year).

Food Pairing: I think some pork tenderloin medallions and a dark brown gravy would be nice here, porters and gravy are always a hit and this beer will kick it up a notch.

As I mentioned above, they use vanilla beans in their beer which I have never done before in a home brew. Here’s a video that shows you how to do this, it’s very similar to making vanilla extract just you don’t need to wait 6 months.