Taster Tray Series – Howe Sound Devil’s Elbow Ale & Smokehouse: Today’s feature is the Devil’s Elbow Ale & Smokehouse which is in Vancouver, BC at a convenient location right next to the Stadium Skytrain station, which is core feature of our public transit system. I’ve been meaning to visit this place ever since it opened in 2014, but I haven’t made the time to get out there until very recently. This expansion is the first of what I believe to be many more brewpubs from brewers located outside of downtown who will copy this idea in order to capitalize on the current local Vancouver craft beer and foodie culture.

Howe Sound & Devil’s Elbow: The brewery who makes all the beer for this bar was established in 1996 in Squamish, BC which is situated along the Sea to Sky Highway heading towards Whistler from Vancouver. In 2014 they announced an expansion into downtown Vancouver with the establishment of their new Ale House, giving people like myself an opportunity to try their multiple beers on tap at a place that is a little closer to home. The pub is named after a grade 4 rapid on the nearby Elaho River, as well as their Devil’s Elbow IPA, so the name is quite fitting for the pub. I felt the place had a pretty approachable atmosphere, the bartenders were nice and it was a good vibrant pub that was fun to visit. 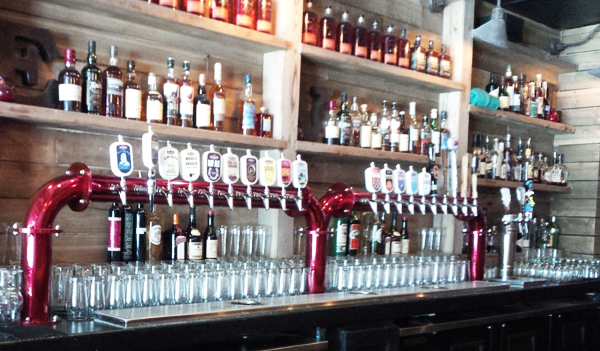 They were featuring 15 of their beers on tap as well as 5 BC guest taps and a lovely line up of whiskys on the wall.

The Taster Tray / Flights: I paid $9.00 for my taster tray, which included any four beers from their taps in 5 oz tasting glasses. Albeit a bit more than I am used to paying for a sampler, this is pretty much standard for the area and I still felt that I got reasonable value because I ordered their Imperial Stout and Barleywine, both which are normally marked up a little higher. Since I was sitting at the bar, I didn’t get a wooden tray however other patrons at tables who subsequently ordered taster trays after seeing mine did get their’s served on a standard rectangle wooden tray. I received good quality pours (no glassed touched the spouts) in clean glasses with the right amount of foam for each beer. At the bar $7.50 gets you a pint of their regular beer line-up, unless it’s Imperial where your serving size is less, so if you pick your beers right the taster tray value for money ratio improves significantly depending on your selection.

The Beers: From left to right in the title picture I sampled their Pot Hole Filler Stout on Nitro, their Wolly Bugger Barleywine, Devil’s Elbow IPA and HopRaiser IPA. I am a huge fan of Wolly Bugger and I’d never had it on tap so that was great to try. The Pot Hole Filler on Nitro was fabulously smooth and had a creamy mouth feel with notes of tobacco, roasted malts and black licorice – this is must order if you ever go there. The other two IPA’s were okay, but I prefer their Total Eclipse of the Hop Double IPA so maybe I’ll grab that one next time. Worth noting, they also had some good quality guest bottles below the bar if you ask them they’ll let you know what they have and the price of their selection, for example I had a La Buteuse by Trou Du Diable after my sampler tray.

Final Impression: As mentioned previously, this place had a nice laid back atmosphere and friendly staff that made you feel welcome. Since it was happy hour, I got some food and boy was I impressed by how good it was and how big the portions were. This bar is perfect for a pre/post-game beer and meal or a simple night out with friends, you can’t go wrong here. Since The Devil’s Elbow is conveniently located, friendly, serving great craft beer properly and excellent food for a fair price, I can see myself returning here again and again whenever the opportunity arises.