Steel & Oak in New Westminster has been known for churning out some unique and interesting seasonal releases that help differentiate them from other BC breweries and push the boundaries of creativity on some styles of beer that are brewed less often locally. Releases such as a Steinbeer (a hot stone submerged lager collaboration), a Barrel Aged Smoked Hefeweizen and a Rum Barrel Aged Wild Ale show off some of the style diversification that they have released to the local market, much to our delight. Needless to say, they show a true passion for creativity and brewing a quality product for us craft beer fans to enjoy.

Just before winter hit Greater Vancouver at the end of 2016, they released their first bottled Barleywine to the market in two wine barrel aged varieties called En Blanc and En Rouge, each signifying the colour of wine barrel they were aged in. I am a huge Barleywine fan, so I’m always interested in a new release, however there’s also a few things with this one that make it pretty unique which I’ll get into below. Most breweries barrel age their Barleywines in Bourbon barrels so for variety alone I was quite intrigued by this coupled release in different barrels. I was really fun to compare and cross examine the effects of each barrel on the base batch of beer (which was the same for both bottles) and then to blend them in order to create something new. 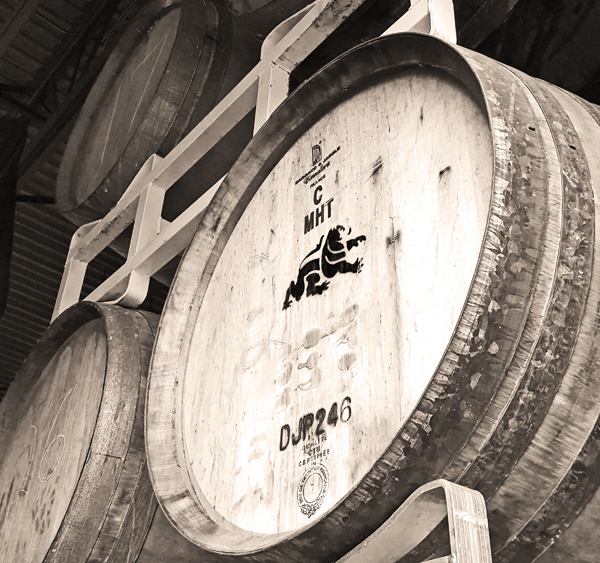 Since Barleywines tend to sell a little slower in BC than many other styles of beer, you can still get these from multiple private liquor store locations around town. They have a very, very long shelf life so there should be no worries on any freshness concerns. Given the high level of alcohol and malt forward nature of them, they also have potential to be aged (especially En Blanc) if you want to cellar a bottle or two. I’ve tasted them fresh and my tasting notes can be seen at the bottom of this article, but before I get into the beer I got a chance to sit down with the current head brewer Eric and ask a few questions about how this one came about.

Q – So how did this whole idea start, especially the wine barrel piece?

A – Peter (previous head brewer) had really wanted to do a Barleywine and was particularly interested in making one with a wine yeast as opposed to a more traditional ale one. After a few pilot batches and tastings, a red wine yeast passed the test and ended up being selected to make this beer. We were able to get our hands on some red and white wine barrels, so we brewed one big batch and split it between the two barrel varieties for some aging in order to infuse some of the barrel characteristics in to the beer.

Q – Was there anything interesting or particularly unique to this beer versus other beers you have brewed?

A – Probably the biggest difference was in the amount of grain we had to use which created a whole lot more spent grain than we normally have. So let’s just say that after we brewed this one the animals on the Aldergrove farm, whose owners pick up our spent grains for animal feed, were particularly well fed!

Q – How long was the beer aged for in the barrels and how did you decide it was the right time to release them?

A – They were aged for about a year in the barrels and every couple of months we would pull samples and the staff would try the beer to see if they thought it was ready. Once we thought it was just perfect we pulled it from the barrels to be packaged up into the bottles.

Q – Barleywines tend to age really well, what are your thoughts on its aging this one?

A – This beer was not bottle conditioned and it doesn’t really need any aging, but it would likely stand up to about five years in a cellar before it diminishes. It’s quite balanced and tasty now to be honest.

Me – I completely agree with this, but I’ll still put a couple away for a couple years like I always do.

Q – What’s the likelihood of another release next winter?

A – We’ll see, the barrels are being used for another beer so based on the aging time it’s hard to say what the timing could look like. Certainly it’s not out of the question, but there are no concrete plans in place just yet. Still, in craft brewing things change all the time!

Q – Anything unique about the hop bill, the malt bill and did it have a typical massive krausen blow off like most Barleywines do when they ferment?

A – Because we used a wine yeast it didn’t have the typical massive aggressive primary fermentation like an ale yeast Barleywine would have. In fact, it was more of a slow and steady fermentation in comparison. We used a Vienna malt base with some German specialty malts and noble hops like East Kent Goldings.

Me – this is fairly different in comparison to other Barleywines which typically use Maris Otter or American 2-row as base malts.

A – Sure on occasion if it makes sense for us, however most of our bigger beers are in the 7-8% range like our upcoming [and recent] Baltic Porter release.

Q – Final question, what style of music would you pair with En Blanc and En Rouge?

A – A nice warm fireplace with some Barry White in background, on vinyl of course!

Aroma and Appearance: It pours a dark mahogany colour with some sporadic carbonation bubbles visible and a thin layer of beige foam that leaves just a bit of lacing on the glass as it goes down. The aroma is white grapes, chardonnay wine, pears, brown sugar cubes and just a touch of vanilla.

Flavour: The beer starts off with some grape jelly and pear fruit up front followed by noticeable chardonnay white wine and oak in the middle. On the finish there’s a unique jolly rancher sweetness accompanied by Ranier cherries on the aftertaste.

Overall Impression: The sweeter of the two Barleywines, it still drinks pretty great fresh. However, this one will probably age the best and settle into an even more amazing beer after a couple years in the cellar. 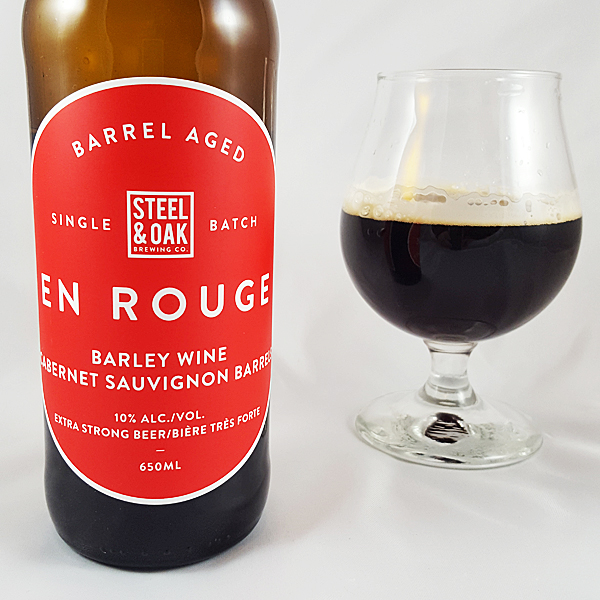 Aroma and Appearance: Identical to En Blanc in appearance, the aroma is quite different because of the red wine barrels. It features dark cherries, vinous grapes and a distinctively rich fruitcake smell that’s loaded with winter spices.

Flavour: The beer starts off with dark fruit coated toffee and heavy bread with a red wine themed middle that’s bursting with red grapes and softened with nuances of red licorice. It finishes with more fruit, mostly blackberries and black currants, and it has a slightly tannic aftertaste which is also slightly oaked.

Overall Impression: The most balanced of the two Barleywines, En Rouge is very ready to drink now and perfect for a cold evening.

Food Pairing: A quality cheddar, gouda or an aggressive blue cheese would all be interesting here, or simply pair with quality cut of medium rare steak.

Yes, I finally blended these two equally and created quite nice beverage which was super fruit forward, much more than either component in the blend. The aroma was blackberries, strawberries, red and white wine, cherries and triple berry jam. As far as the flavour goes, it had highlights of both showcasing blackberries, gooseberries, pears, red grapes, oak and Melba toast with a more velvety texture and smoother finish than each of he beers had on their own.

Overall I was quite thrilled to have tried these beers and to add a few bottles into my beer cellar for aging to see how they do. A big thanks to Steel & Oak for spending some time with me and I look forward to their next creation. In the mean time, I love how they put their “#sobeer” hashtag on the bottom of the bottle caps, it’s a great marketing and is fun to photograph (and filter like hell on Instagram).