Over the last two years, Central City Brewing has created a collaboration craft beer advent calendar with Parallel 49 Brewing to help spread the beer festivities for Canadian craft beer lovers. The mandate this past year was to include 12 brand new beer recipes in their calendars, six new one’s per brewery which not only benefits consumers, but also allows them to test the market on new beer recipes. Based on the largely positive reviews of a beer called Super Sonic IPA in their recent advent calendar, Central City decided to add this new exciting IPA to their full time line up and officially call it Super Stellar IPA. Just recently I was invited to a free for everyone, open to the public launch party at the Vancouver H.R. MacMillan Space Center to help get this new craft beer off the ground and into a space near you.

Red Racer Super Stellar IPA is a Citra and Mosaic hopped beer brewed to a strength of 6% alcohol by volume with 68 IBU’s. It has a nice balance of lemon citrus, grass and herbal pine resinous flavour with a classic bready malt profile and a mildly bitter finish that’s quite different than their regular IPA and fits into their lineup of beers quite nicely. It essentially covers some of the opportunistic middle ground between their IPA and ISA, pleasing both hop heads and malt minds alike. I love having this kind of access to really good go-to IPA’s that are cost friendly without hurting the taste, so it was nice to see this beer launched as a year rounder. Super Stellar will soon be available across Western Canada in 473mL Tall-boy cans for your drinking pleasure, this time featuring Red Betty in a space ship on the logo instead of the traditional bicycle pose.

It’s always exciting to see a large craft brewery engage their local community when launching a new beer and lately Central City has done a great job in running unique events in different locations to generate some local excitement about their beer releases. This launch was hosted in the Cosmic Courtyard portion of the H.R. MacMillan Space Center where you interact with the exhibits and can do things like feel one of 5 touchable moon rocks in the world, hold a real meteorite, look at various pieces of real space technology and play with many fun simulator activities. Central City brought in a DJ who played some celestial 80’s music, the staff dressed the part and were kind enough to distribute beer tickets in a responsible matter to ensure we got a good sampling of the beer in stellar space atmosphere and finally there was some food. 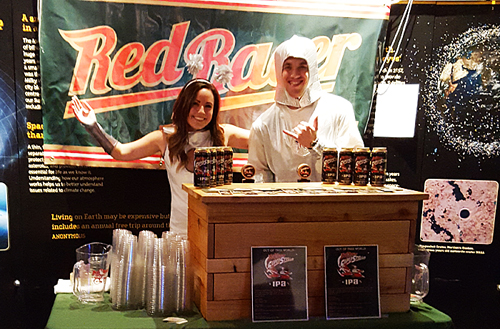 During the event the food they supplied was limited  to canapés from their brewpub (it was free to everyone!) and these attracted various crowds of space vultures who snapped them up in about ten seconds upon arrival, causing the staff to have to send out small decoy plates to ensure they could sneak around to other parts of the room to let everyone have a bite to eat. Although the food was limited, they had enough to get around eventually and it all tasted pretty good, but I didn’t get a chance to snap any pictures of it due to the aggressive nature of the food poachers. The crowd also had a good time exploring the various space themed activities, including a gravity simulator that wasn’t such a smart idea after three beers (spins anyone?) and a fun Lego table that kept us entertained building things, because who doesn’t like beer and Lego right?

I certainly liked the beer a lot, so that’s another option I’ll add to my go-to fridge lineup as I see it show up in the stores and I feel that the Launch Party was more than worth the cost of a Transit pass to and from the event. We were treated well, drank some nice beer and even saw the head brewer Gary wearing astronaut pants – yes, in case you are wondering, I totally threw out the classic awful pickup line for a quick chuckle. I appreciate the invite as always and encourage people to give this Super Stellar beer a try, it tastes just as good if not better than the original Super Sonic IPA that was in their Craft Crossing Beer Advent Calendar and will be pretty fresh right on the shelves soon after the time of this posting.

One thought on “A New Year Round IPA, Astronaut Pants and a Small Piece of the Moon from Central City Brewing”