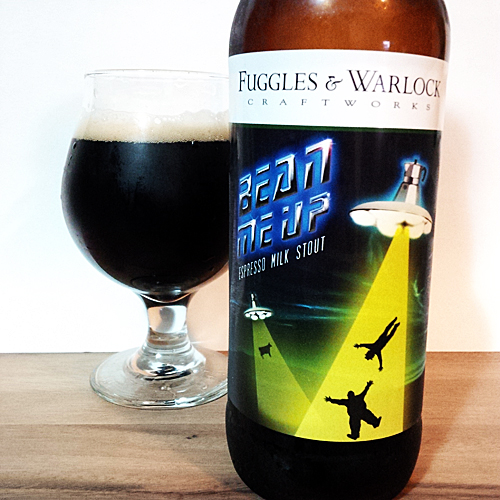 Fuggles & Warlock Bean Me Up Espresso Milk Stout: Brewed in BC by current gypsy brewer Fuggles & Warlock, this beer has 5.7% abv, 24 IBUs and is infused with Salt Spring Island brand Metta Espresso coffee and brewed with lactose to give it a creamy milk texture and flavour.

Aroma and Appearance: It pours a very dark brown with a small finger of foam and no visible bubbles. The aroma is like a mocha frappuccino, with coffee, dark chocolate and cream that also has a side of cherry wood and some citrus notes from the coffee beans.

Flavour: Big on the dark roast earthy coffee at first, this beer quickly moves into lots of chocolate and cherry wood flavours up front while highlighting its smooth creamy texture in the middle. Near the finish, cocoa nibs and dark chocolate notes appear and then it gets dry with a milky aftertaste.

The motto of Fuggles & Warlock is “Keep Beer Weird” which they have done a pretty good job of in their labeling and styling as well as their brewing. Here’s the brewers showcasing their current 22oz lineup.so be sure to look for these on BC private liquor store shelves.

It looks like they have also landed a location for a full on brewery which is awesome! Be sure to check out this super cool video announcement they made: