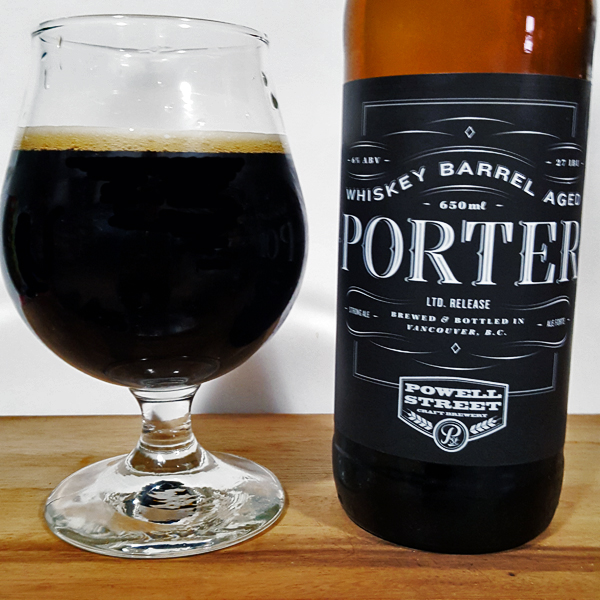 I occasionally ponder why some of the delicious barrel aged beers out there always seem to be brewed to massive, hard to finish in one sitting, put you to sleep alcohol strengths. For example, it often takes me at least 2-3 hours to finish one 22oz bottle of barrel aged Imperial Stout simply because it has an alcohol by volume (abv) strength of 12-14%, which is quite potent. I do this so I can still taste the beer at the end of the night while still being capable of walking around my house without hurting myself on the inevitable journey to my bed. Don’t get me wrong, I enjoy these beers a lot (perhaps too much), however in order to drink them responsibly I find that I need stretch out my consumption to ensure I don’t drink them too fast and therefore suffer negative consequences the next day. Sure there are options like bottle shares, having a couple friends over, ordering a sleeve at a pub which are all great choices and probably the best strategy for strong beers like this, but for the average craft beer fan like myself, a beer a night occasionally shared with one other person is kind of the more affordable norm. Let’s face it, these high alcohol beers are fun and very tasty, but they’re not always easy to consume which makes it harder to enjoy a barrel aged beer on a more frequent basis.

You see higher alcohol content Imperial Stouts and other barrel aged beers are what I call “weekend, one and done” beers. Most of these come in 22-25oz bottles, cost at least $20 or more a piece and are the equivalent (in terms of pure alcohol contenr) to consuming an entire bottle of wine. If you do the beer math, this is 5-6 standard drinks in one “serving”, which let’s face it, is a lot booze for any single evening. Would you regularly drink a full bottle of wine on a weekday when you have to get up and function the next day? Certainly not on a regular basis I hope. Sure, just like wine you can save these beers for the next day and most of them will survive just fine in the fridge (especially corked or recapped with a beer bottle saver), but once it’s opened that temptation to finish it grows with every delicious sip and some beers just don’t taste quite the same the next day, especially if you’ve already aged it yourself in a cellar.

Good luck finishing this one all on your lonesome

If you want to get those amazingly rich wood barrel aged flavours in a beer, I find that you don’t have a lot of options other than buying a large serving bottle and you’ll have to spend a lot of money for a beer. For example, I just recently bought 3 of these amazing beers for a grand total bill of $110, just for three 22oz bottles of beer (the same cost as a very respectable bottle of Scotch Whisky). In order to address both affordability and drinkability, I really would love to see more of these beers in 12oz bottles, as even corked and caged they are much more affordable for consumers and way easier to drink or even share with another person in one sitting. Some breweries like Dieu Du Ciel in Montreal release their beers in smaller bottles and I’ve seen some in the USA using them, but for the most part these beers are only available in large formats. I’ve even witnessed some breweries ditch the smaller bottle in favour of the 22oz bomber, which sadly cuts down significantly how many I purchase for annual cellaring.

This brings me to expressing my appreciation towards Powell Street Brewery for making a delicious porter that is robust enough in flavour to stand up to some aging in Whiskey Barrels without being brewed it to a crazy high strength in alcohol content. Their Whiskey Porter does this quite nicely, coming in at a “weekday beer” strength of 6% abv and priced affordably at about $9 per 22oz bottle. At 6% abv, this beer in 22oz format comes in around the 2 standard drink range so if you finish the whole bottle in a single sitting, well odds are you’ll still wake up fairly productive the next morning. There are other lower abv barrel aged beers out there, specifically in the sour range there are lots of options for any barrel aged beer fan, but in the porter and stout category, in order to get a barrel aged beer you are usually in for 10-12%+ abv ride. While usually worth it cost wise, consuming those big beers is not something you can (or should) do very often. Until more breweries make barrel aged beers like this one at a lower alcohol content, this will remain a real challenge and is most certainly a big beer geek problem.

You see back in late 2013 at the 2013 BC Beer Awards, Powell Street Brewery won The People’s Choice Award for their Whiskey Porter, capping off an already incredible year where they also won Beer of the Year at the 2013 Canadian Brewing Awards for their Old Jalopy Pale Ale. This was a busy year for David and crew, who as head brewer still held his day job at the time and brewed small batches in a tiny brewery on Powell Street while his wife handled the equally busy operational side of things. They brewed a lot of Old Jalopy due to demand and very little of their beer was bottled at the time since most of it was slurped up by the growler crowd and small batch bottling is a time consuming pain in the rear. Fast forward a few years later, with some national attention, some great releases and a huge explosion of craft breweries in British Columbia they find themselves in a larger space with a more diverse bottled beer lineup, better bottling equipment and so they finally re-brewed this accessible barrel aged concoction that was bottled and released to the public in January 2016..

So how is the beer anyway? As you can see from the picture it pours a very, very dark brown (almost black) with no visible bubbles and a thin layer of tanned foam near the top of the glass. When warmed up a bit closer to cask temperature, its aroma features quaffs of vanilla, hints of iodine forward whiskey notes, black licorice, chocolate liqueur and wood chips. The flavour profile is big on the chocolate and vanilla extract upfront, with hints of licorice and oak followed up by a sour whiskey mash middle and a tobacco, molasses and rich vanilla bean finish. This is an excellent beer that I rated as 8.5/10 (I rate on a fill 10 point scale which is described on the right). Powell’s Whiskey Barrel Aged Porter delivers big, yet balanced flavours for a good price. Not every dark beer that goes in a barrel has to be super strong and this one proves it, there are still some bottles kicking around private liquor stores locally and I suggest you give it a try if you manage to find one. To the fine folks at Powell Street Brewery, I simply say thanks and keep up the great work!

As you can see, they appear to have used barrels from Woodinville Whiskey Company in Washington, which is great to see them supporting a nearby craft distillery just south of us in British Columbia. I embedded a few pictures from their Instagram account (be sure to follow them to stay up to date on releases) just to show some of the stages they went through in making this excellent beer.

Testing time before they go into the bottles and kegs

Tasting our Whiskey Barrel-Aged Porter one last time before it hits shelves next week. #pscb #barrelagedbeer