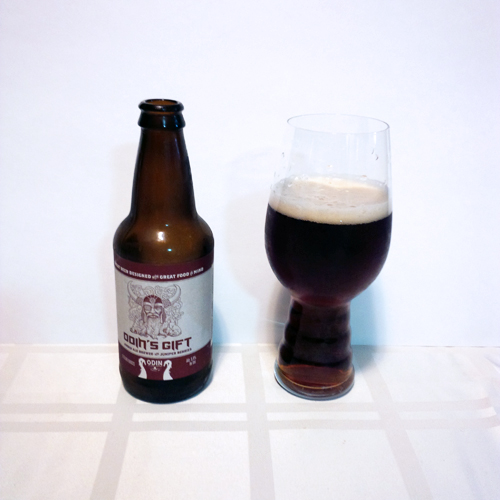 Odin Brewing – Odin’s Gift Amber Ale with Juniper Berries: Brewed in Seattle, WA at a strength of 5.4% with 28 IBUs and Juniper Boughs according to their website. This was another BYO 6 pack beer from Trader Joes, allowing me to sample beers before committing to a full 6 pack.

Aroma and Appearance: It pours with a dark brown amber colour with a thin layer of foam and some small bubbles. The aroma is toffee, raisins and berries presumably of the juniper variety.

Flavour: Raisins, toffee and an earthy finish that has a juniper berry aftertaste that melds into an earthy kind of dirty flavour.

Overall Impression: Don’t really like it, I find a lot of the amber beers overdo the CaraMunich and CaraRed malts to the point where the aftertaste is terrible.

Rating: Not very good at 3/10, don’t like this one. This may be related to my palate, I have trouble with some Red and Amber beers, especially the one’s that remind me of Rickard’s Red which I can’t stand. If you are a fan of Amber Ale’s, especially those with a huge malty dirt profile you may like this one.

Food Pairing: Maybe mushroom caps or something with an earthy flavour would help?