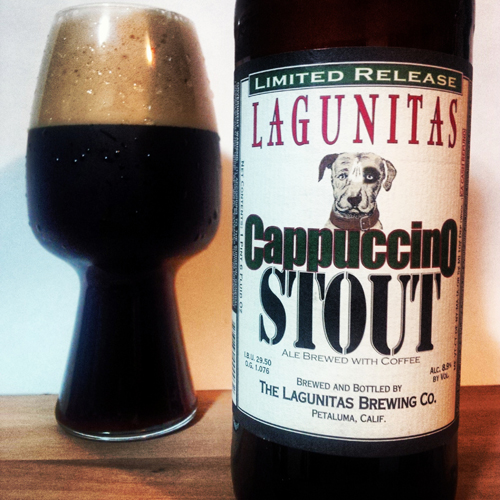 Lagunitas Cappuccino Stout : A limited release from this California brewer their coffee Stout comes in at a 9.2% alcohol level (lets face it, its Imperial Stout strength) with 29.5 IBU’s and was poured from a 22 oz bottle into a snifter like glass at home.

Aroma and Appearance: It is coffee brown with a half inch of light beige foam and no bubble action. Aroma consists heavily of coffee with hints of cocoa, chocolate and some lemon citrus notes.

Flavour: Dark chocolate and toasty grains upfront, it moves quickly into an incredible creamy dark roast coffee flavour in the middle. This beer finishes with a  dry cocoa powder and bitter citrus flavour that is similar to a good quality cup of dark roasted coffee.

Overall Impression: It drinks like a session stout, but isn’t and I was amazed hot hot and boozy the last imperial stout I had was compared to this one with similar alcohol levels. Widely available in BC now, even the Government stores have this one so be sure to buy it up!

Rating: I give it a 9/10 as in awesome due to the drink-ability and flavour of the beer, if you like coffee flavoured or infused beers this has to be one of the top one’s.

Food Pairing: Anything that goes good with coffee, like coffee cake, donuts or biscotti.

Here’s a video from a few years back that talks a little bit about how they make this beer and what they were trying for and successfully achieved with it.