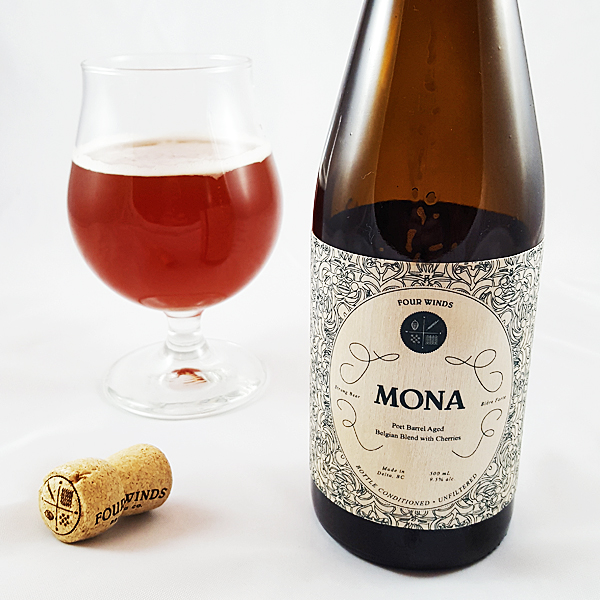 Four Winds Mona: Occasionally and often out of the blue, Four Winds will release a very special and limited beer to the local crowd who is willing to come on down the to brewery to buy bottles and Mona is one of those special releases. According to the brewery this 9.5% abv beer was aged in Port Barrels on cherries and blended with a few other unique barrels to add a “strikingly lush depth of character”. Limited to 1200 bottles in a four bottle per person brewery only release, this beer is sold out and you’ll have to beg your friends to share a bottle with you if you missed it over the two and a half days it was available. If you are looking to try it, you can always try the brewery as they may have on tap still and if not they always have lots of other great stuff there to try anyway. I’m sorry to say (ok, I’m not sorry at all) it is very, very good and well worthy of being my local beer of the week nomination.

Aroma and Appearance: It pours a slightly cloudy copper red colour with one finger of foam that dissipates quickly and leaves some sporadically shaped lacing on the glass as it goes down. The aroma is complex, featuring quaffs of cherry tartness, apple cider vinegar and mineral water with hints of orange liqueur and red port wine. This is one of those beers that you end up spending more time smelling than you care to admit, but the aroma is so interesting it’s totally worth a plethora of sniffs and whiffs.

Flavour: The beer starts right off with apple cider vinegar and barnyard funk, with nuances of strawberry purée before it reveals a strong cherry tartness that overlays its soft subtle mouth feel and rich port wine flavours. Mona finishes with a distinct cherry yogurt presence and a grand mineral entrenched aftertaste that is overwhelmingly satisfying.

Overall Impression: So good, so unique and just so tasty. I mean honestly this type of complex beer is a privilege to drink locally. At $12 a bottle, the price to flavour ratio is very high so a big shout out to Four Winds for thinking of their clientele when pricing the bottle. There’s some aging potential here, but it’s hard to predict how it will react in the cellar so I can’t say one way or another if it’s worth aging for long.

Rating: I gave it an awesome rating of 9/10, drink yours, find a friend with a bottle or find it on tap!

Food Pairing: Rich goat cheese, charcuterie or simply enjoy on its own.

This is how we all found out about the Mona release, be sure to follow their social media to stay in tune with their beer releases and other important information like the current taco menu!

One thought on “BC Craft Beer Review – Four Winds Mona”