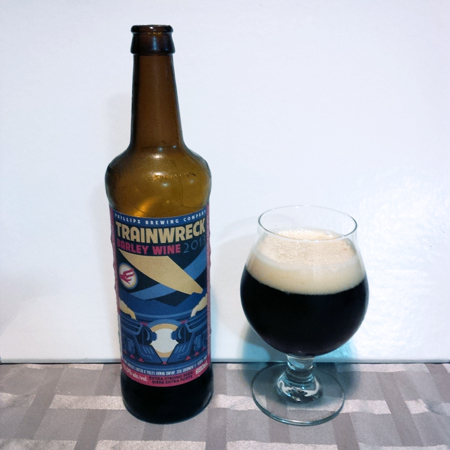 Phillips Brewing – Trainwreck Barleywine 2013: Another cellar tester, this one was brewed in Victoria, BC at a strength of 10% and was poured into a snifter at home

Aroma and Appearance: When held up to light it reveals a dark mahogany colour with a finger of foam and a bit if bubble action. The aroma was brown sugar, cinnamon, raisin, molasses and nuts.

Flavour: I was perplexed by this one, for all the aroma there was very little flavour. When I drink barleywine I pour, wait a good 5-10 mins until it hits the right drinking temperature and this one needed to sit for like 20 minutes before any real flavour revealed itself. Finally, I got some malty sweetness, toffee notes, dry bread and a bit of boozy.

Overall Impression: It’s ok, but sadly not near any other barleywine out there.

Rating: I gave it a 6/10, above average rating when compared to other beers, but for the style there is a lot of better stuff out there.

Food Pairing: Some salty meat like prosciutto, or Hungarian salami may bring out some more flavour in this one.

Not on my buy again list unless the newer vintages get better reviews.